Toyota Motor Corporations (TMC) is a Japanese multi-national automotive manufacturer established on August 28, 1937. Headquartered in Toyota, Aichi, Japan, it is the ninth-largest company in the world by revenue.

TRIUMPH OF CELEBRATION
In its 82 years of existence, Toyota has won numerous awards and accolades for quality, durability, style and safety reasons along with being one of the most trusted and innovative automobile manufacturers. As of 2016, it is the world’s second largest automotive manufacturing company. Since 2012, Toyota has been producing over 10 million vehicles each year and on the same year the production of their 200-millionth vehicle was reported. It is the market leader in the sales of hybrid electric vehicles with over 10 million sales and the Prius range is the world’s top selling hybrid car with over 3.5 million sales as of 2017. Toyota is the worldwide partner of the International Olympic Committee and International Paralympic Committee through the end of 2024.

From the first Toyota AA car in 1936, the company now sells 33 models of hybrid cars in 90 countries addition to commercial, fuel cells, MPV/Vans, Cars and SUV vehicles which are sold in over 170 countries. Toyota vehicles are produced in 53 plants spreading to 28 countries and regions in addition to Japan and there 15 design and R&D bases in 9 countries and regions including Japan. Toyota’s expertise expands beyond its automobile manufacturing business into a variety of other fields, including housing, financial services, e-Toyota, housing, marine products, bio-technology & afforestation, energy and powertrain unit sales.

In 1999, Toyota Motor Corporation started an automobile technical training course in Japan with the aim of helping the Brazilian community in the country, who find it difficult to adjust to Japanese schools because of the language barrier. The trainings are conducted for a year in Portuguese at the Toyota Technical College Nagoya in Kiyosu City, Aichi and are tailored to the requirements of the vehicles in the local market. This full-time course has a capacity of 20 students and over 280 students have graduated till date. The Global Production Centre (GPC) is a human resource development training program that prepares supervisors and trainers at overseas bases, as well as employees, assistants and supervisors from Toyota’s headquarters who are going abroad.

​BRAND COMMITMENT​​
As the company’s exports are developing, it is setting manufacturing bases in various regions. Made by Toyota, an assurance given by the company that no matter where the vehicles are manufactured, all of Toyota products maintain the same high level of quality that they have provided all these years. Toyota’s ultimate goal is zero causality from traffic accidents, to achieve that, the company is promoting the Integrated Three Part Initiative involving, people, vehicles and the traffic environment and incorporating learning from actual accidents into vehicle development. As a step to achieve the aim, TMC launched Toyota Safety Sense a collision avoidance safety package.

MASTER STROKE​​
• Toyota vehicles are produced in 53 plants spreading to 28 countries and regions.
• TMC has been producing over 10 million vehicles each year since 2012. 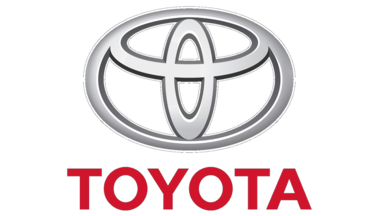